“BEET” Your Way To Health 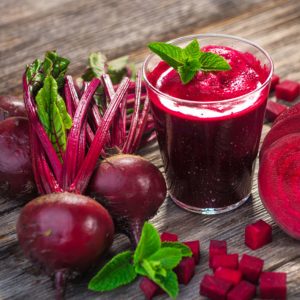 Beets help you detox and lose weight because they contain no fat and are a good source of dietary fiber — half soluble and half insoluble. These two types help fight fat by maintaining proper bowel function and lowering cholesterol levels for weight loss. Similarly, beets are rich in magnesium, a mineral that supports optimal nerve and muscle functioning, which could be beneficial for losing weight.

A 2011 study found high levels of magnesium led to higher levels of testosterone — a hormone that promotes fat tissue loss and increases in muscle. Since muscle burns more calories than fat, maintaining or building muscle can help with shedding the pounds. Moreover, beets contain phytonutrients known as betalains — betanin and vulgaxanthin — which are effective in reducing inflammation and supplying the body with antioxidants. Betalains also support detoxification, which may contribute to weight loss.

Beet juice can be valuable if you’re looking to boost endurance during your workout. Previous research has found those who drank beet juice before working out were able to exercise for up to 16 percent longer. Researchers believe the nitrate content in beets, which turns into nitric oxide, reduces the oxygen cost of low-intensity exercise while enhancing the stamina for high-intensity exercise.  In other words, nitrate-rich food can increase exercise endurance.

Beetroots have been linked to improving poor digestion by exciting the nerves in the intestines and enhancing the body’s ability to digest food. A cup of beetroot contains 3.4 grams of fiber, which makes beets a good source of fiber. Fiber makes you regular because it bypasses digestion and travels down to the colon, where it feeds friendly gut bacteria or it adds bulk to stool.

The superfood has been labeled as “nature’s Viagra” due to its nitrate content. Similar to Viagra, beet intake increases nitric oxide formation, which dilates blood vessels and boosts circulation to the penis. This leads to better erections for men during sexual intercourse, and helps them last longer in bed.

Beetroot juice can effectively lower blood pressure in men. In a study published in Nutrition, men and women who drank 17.6 ounces of beet juice, which consisted of about three-fourths beet juice and one-fourth apple juice, had a lower systolic blood pressure six hours later. However, when researchers limited their analysis to men, they found a significant reduction of about 4.7 points among those who drank beetroot juice versus the placebo.

The phytonutrients in beets, like betalains, have been found to be cancer-preventive. Animal studies have shown beets inhibit carcinogen formation and increase the production of immune cells and body enzymes that help stop cancer from developing. Specifically, a 2013 study found beetroot extract reduced multi-organ tumor formation in several animal models when added in drinking water.

The science is still murky with humans; a study published in the Australian International Clinical Nutrition Review claimed a 50-year-old man recovered from lung tumor, which clinically corresponded to lung cancer, after consuming beetroot. After six weeks, the tumor disappeared, and four months later, the man gained back over 20 pounds of weight. Researchers are still hesitant on making bold claims about the vegetable.

Beets are considered brain food that can slow the effects of dementia and Alzheimer’s disease. Drinking beet juice increases blood flow to the brain of the elderly, which may fight the progression of dementia, according to a 2010 study. A high-nitrate diet led to an increase in blood flow to the white matter of the frontal lobes — the areas of the brain linked to degeneration from dementia and other cognitive disorders.

Folic acid in beetroot can help protect against Alzheimer’s by preventing damage to the hippocampus, which the brain devoted to memory and learning. In an animal study, mice with Alzheimer’s-like plaques in their brains were fed a diet that included a normal amount of folic acid. Those fed the folic acid diet had more brain cells in the hippocampus compared to their folic acid-deficient counterparts.

Researchers suspect that high levels of homocysteine in the brain may damage the DNA of nerve cells in the brain. Folic acid is believed to work by helping protect the brain by allowing nerve cells to repair this DNA damage.

Click here if you are seeking for a healthier lifestyle and chiropractic care, or give us a call and make your new patient appointment. I look forward to seeing you and creating immense value for you. To read up on more health and wellness tips follow our blog here.